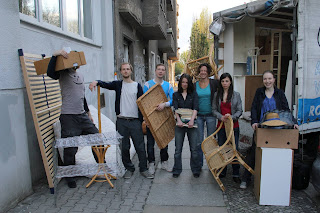 PARODY OF A VAMPIRE: DARK SHADOWS

Tim Burton’s Adaptation of the Bloodsucking-Genre

Dark Shadows is the latest Tim Burton movie from 2012. He adapts a television series by the same title - as the third remake. One more time Burton casts Johnny Depp for the main role. The original cast has cameos.

Barnabas Collins, a young man from a wealthy family falls in love with Josette. He is turned into vampire by the witch Angelique in 1780, who also kills Josette. Jealous Angelique goes on to rule the little fishing town, after the vampire is put into a coffin and buried.
Construction workers unearth him in 1972, so he can take revenge, after having drunk the workers. He also discovers the descendants of his family and moves in with them. His presence brings some adventure into their decadence and rock music era. They accept him, because he promises wealth. Michelle Pfeiffer, Eva Green, Jonny Lee Miller and Christopher Lee belong to the cast. So Depp could learn a lot from one of the greatest and most expericenced vampire-actors of all time.

We find a lot of references to the past Burton / Depp films. For instance, the way Johnny Depp moves his fingers very slowly reminds us of the vampire Bela Lugosi in Ed Wood, released in 1994, almost 20 years ago. Ed Wood, played by Depp, was amazed about the way Lugosi, the vampire, was moving his fingers. In Dark Shadows, Depp plays a vampire himself and is moving just like Lugosi was, as if Lugosi was his teacher who showed him the right vampire gesture.
The long nails refer as well to Edward Scissorhands, of course, and also to Sweeney Todd, where Depp is waving the knife in the air and is saying that his hand is complete.
There are a few vampire clichés in Dark Shadows, such as the way Collins (Depp) is biting his victims, with his mouth and eyes wide open. The title Dark Shadows itself is a cliché of vampire movies and sounds a bit like a parody of horror films.

As always, Johnny Depp makes us laugh. His character, Collins, is totally put back.
Indeed, he was living in the 1880s and has to live in the 1970s, which creates a deep gap between his tradition and his surroundings. This gap is interesting and shows how custom has changed. Just like in Edward Scissorhand, Johnny Depp has to live in a world where he does not belong and where he is totally different from the others.

Helena Bonham Carter, who plays the psychiatrist Dr. Hoffman, is once again a part of the film and brings humor, too. She tries to become a vampire herself. Those two characters stick out because of their eccentric style. Vampire, werewolf, witch, old castle, all those elements are present in the film, as well as something modern and anachronistic: rock music.

Instead of hearing the sound of an organ or of violins, we can enjoyrock music, performed by an icon of horror, Alice Cooper himself.

Therefore Dark Shadows differs from horror movies because it’s a comedy which plays with different eras, mixing them together and creating a funny gap. Like in Sleepy Hollow, Burton uses very spooky scenes, especially in the end, where the effects scare and amaze us. Dark Shadows entertains fantastically: Another successful Burton / Depp collaboration, which shows a vampire with a new point of view. It takes the famous clichés and puts them into a funny parody. The film cost just $ 150 m. Here are the full credits.